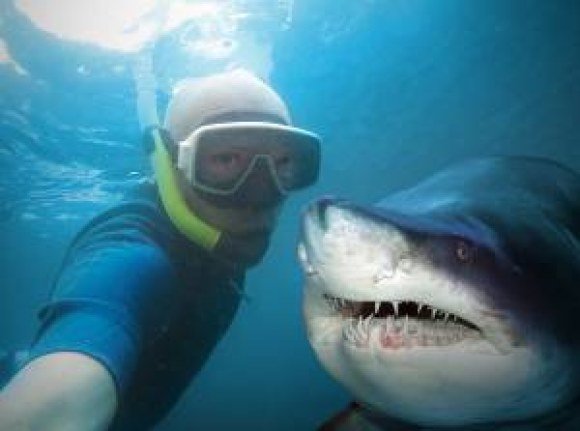 It’s true!  You can jump back into the shark infested waters with a feeling of security. According to Mashable, “Selfie deaths now outnumber shark attack deaths.”

Although this may be beyond comprehension, consider the evidence:

• A 66-year-old Japanese tourist died after tumbling down stairs like Humpty Dumpty while attempting to take a selfie at the Taj Mahal.

• A teenager was electrocuted while climbing a train to imitate an action movie hero.

• Wish you wealthy enough to charter your own private plane? You may want to rethink your expenditure when your bank account is overflowing.  The pilot of a small plane on a short jaunt in the air was taking selfie pictures with a cellphone last year just before he crashed. Both he and his passenger were killed.

• What was the man who took a selfie during the running of the bulls in Pamplona thinking?  As he turned around to click the self-image,  this mammoth half-ton beast planted his horns into the man’s derriere.  He did survive, but is now branded himself as a result of his foolishness.

• Four of the selfie deaths in 2015 were due to people attempting to acquire a perfect angle to frame their mugs on their mobile device…and then taking a life-ending tumble, resulting in tragic and preventable death.

• In Colorado, the intense overabundance of selfies being attempted by tourist with untamed bears  in their natural habitat caused the park to shut its’ gate to tourists for the foreseeable future. The reason for the closure, according to wildlife enthusiasts, was that “it was a danger to the animals.”

• Selfie-deaths are becoming so common that there is even a Wikipedia page dedicated to listing selfie-related injuries or deaths.

When It Is Appropriate

There are a multitude of locations where taking a selfie is appropriate, fun and safe. For example, to the best of our knowledge, no one has been harmed when snapping an image with Disneyland’s four fingered mouse named Mickey. Taking proper precautions can makes a selfie from the Empire State Building or Eifel Tower a treasured memory for a lifetime. There is no need to relinquish your passion for self-portraits, no matter where you are.

Just assure you know where your feet are planted and be sure you have procured a Smartphone with a high level of memory to store your selfies, produce clear images (even if you have a double chin) and identify a network that offers coverage so you can send off these unique snapshots at the same moment you have encapsulated your self-portrait.

The knowledgeable souls at Verizon and T-Mobile provide unmeasurable customer service to assure you secure the mobile gadget that best fits your needs.  It’s up to you to engage in safe behavior… Or perhaps go back into the water where it is safer to swim with the sharks.