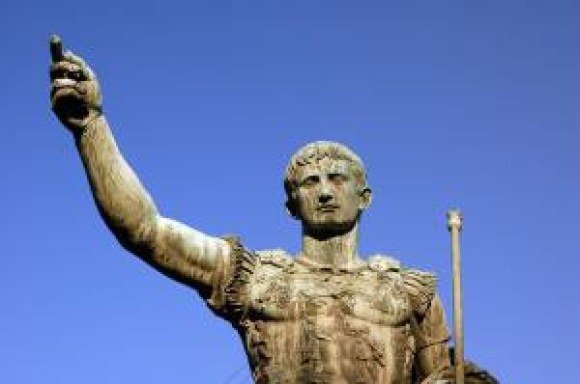 Beware the Ides of March

Most of us only know about the Ides of March from our snooze-able readings of Julius Cesar in high school English class.  It was actually a pretty important day for the Romans, sort of a catch-all religious fest, because they were fond of re-tooling their calendars a lot.  If you want to give a nod to antiquity, celebrate with footwear.


The Ides is infamous because the lore goes that Julius Cesar was assassinated on the 15th of March.  The Ides of March also was close to the Roman New Year—so Happy Ancient Roman New Year, folks!  A day of picnics, revelry and drinking—yes, let’s celebrate this!  The Mystique Blue Embellished Sandal from Boston proper will help you feel like the Roman Goddess of the New Year, Anna Perenna.  Carouse it up and dine al fresco!  Get 10% off your order when you sign up for email from Boston Proper.  Sultry tunic not included.


The high priest of Jupiter, the Flamen Dialis, led a procession of sacrificial sheep to appease Jove on this day.  Obviously, we won’t want to do this today.  First….eew and second, animal rights folks would be justifiably angry.  However, you can still process about the realm in your own sheepy footwear sporting UGGs.  Check out their site for those ultra comfy fleece-lined sandals they offer. Use our promo codes, and by Jove, you’ll get free two-day shipping on any order.


The Romans also had a weird custom they borrowed from the Greeks of scapegoating at this time of year.  An older man would dress in animal skins and then townspeople would drive him out of the city forcibly.  This was called the Sacrum Marmurio.  However, before you flagellate your masochistic grandpa to delve deeply into your Roman heritage, perhaps you should consider getting some customized Converse sneakers in their CORE Leopard print.  With $5.95 flat rate shipping, get some new shoes for you and your grandparents.


March, of course, gets its name from Mars, Roman god of war, the hot-tempered, feisty, rough and ready deity of lore. The Ides of March is arguably a great day for athletic fetes too.  Channel your inner gladiator and don some Nikes on this day.  Nike, in the ancient world, was a goddess of victory!  Whether you are shooting hoops, running a marathon or raising hell on the golf course, you’ll never want to be without your Nikes.  Enjoy free shipping on all orders over $75.


Beware the Ides of March, because you’re going to have some fun!  The old Roman ways were certainly cooky and you can share in some of the fun on the Ides of March.  It doesn’t have to be an unlucky day!  It can be a great day to save using our promo codes.  Check out our promo codes and channel your inner goddess or gladiator.