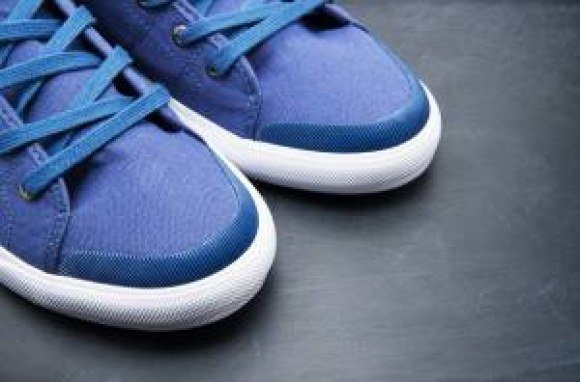 June 22 is Global Smurfs Day.  If you’re a child of the 80s, you may know about the Smurfs or enjoyed the recent reboot.  The history of Smurfdom actually pre-dates the 80s, so in honor of all things Smurf, we have some Smurf-inspired footwear.

In fact, your grandparents may have been a fan of the smurfs before you, especially if you’re Belgian.  Belgian cartoonist Peyo created them way back in 1958.  For our would-be Smurfettes, Boston Proper has all you need to be fashionable.  We recommend the Jeweled Casual Sandal, with its rich blues and studded with gems.  You’ll be a very cute gnome prancing around in these sandals.  Enjoy 10% off your order when you sign up for emails from Boston Proper.

Some contend that the Smurfs ushered in the zombie film genre.  Six years prior to George Romero filming Night of the Living Dead, Peyo introduced a Smurfs storyline called  "The Purple Smurfs". The plot is that a Smurf is bit by an unusual stinging insect which spreads a virulent disease that turns its victims into angry, insane monsters that hop around shouting "GNAP!" while also mindlessly trying to bite every smurf in sight to spread the plague.  Zombie smurfs sound scary, and to outrun them, you’re going to need a great shoe.  Papa Smurfs, we got the best shoes for you.  The Nike Air Zoom Pegasus 31 for men is the best running shoe on the market.  Get free shipping on your order of $150 or more using our codes.

Smurfs are firmly anti-genocide.  UNICEF created a series of anti-genocide commercials featuring a happy Smurf village that gets decimated by a bomb.  With its final shot of a crying baby smurf surrounded by dead Smurfs and the mangled body of Smurfette, it was really disturbing.  When you need to take a stand, make that stand in Converse.  With $5.95 flat rate shipping using our codes, you can customize a totally blue, anti-genocide Smurf shoe if you want.

Peyo made no secret that he did not like Smurfette.  Peyo famously said of Smufette, “"She seduces, she uses trickery rather than force to get results. She is incapable of telling a joke without blowing the punch line,” he expounds further, saying, “She is a blabbermouth but only makes superficial comments. She is constantly creating enormous problems for the Smurfs but always manages to blame it on someone else."  You have to wonder what poor woman Peyo based Smurfette on.  It’s time to reclaim Smurfette, ladies.   The Classic Short Rustic Weave Boot by UGG oozes smurf appeal, like Smurfette.  With free overnight shipping using our codes, you’ll feel as crafty as Smurfette too.

One of the most popular iPhone apps in 2010 was Smurf Village, which allowed iPhone users to make a Smurf Village and rebuild it after Gargamel destroys it.  However, it cost some unlucky parents a lot of money when their kids were making unauthorized purchases to upgrade their village.  You’ll never be caught in a spending spree using our codes.  We’ll save you from smurf zombies and high retail markups when you shop using our codes.