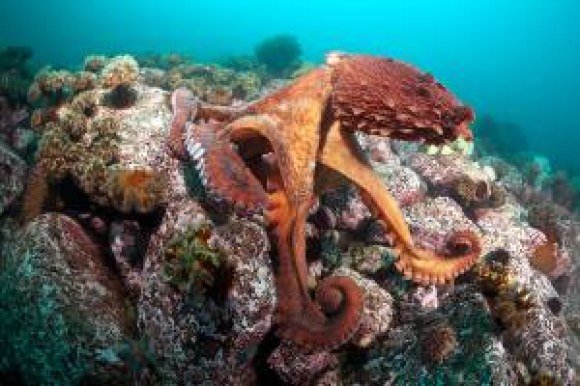 Octoper—whoops, October 8th --is Octopus Awareness Day.  If you’re a cephalopod-phile, you know that octopi have tempted the imaginations of bipedals for centuries.  A symbol of mystery and illusion, you know there’ s more to the eight-tentacle creature than meets the eye.  To celebrate Octopus Awareness Day, we’ve curated eight great octopus-oggling apps and sites.

1. Seattle Aquarium Octopus Live Cam—commune with an octopus in real time and even watch the octopus savor its meals.  Starring the Giant Pacific Octopus, these octopi can weigh in at up to 150 lbs., with arms spanning 20 feet across.

2. Paul the Octopus—out of sync with your tarot reader? Is your palm reader appalling?  Take a break from them and take a gander with Paul the Octopus.  Whether you need a real answer or a good laugh, Paul searches the watery depths to life’s most important questions.  Load it onto your new iPad from Verizon Wireless!

3. Aunty Flo—Have octopi been dancing in your dreams?  Have you imagined yourself as an octopus since your youth?  Perhaps your spirit animal is an octopus.  AuntyFlo.com discusses what having an octopus as a spirit guide means.

4. Octopus!—Get your tentacles on this e-book by Katherine Harmon Courage in the Google Play Store. Courage elucidates that octopi lived before the first dinosaurs and that two thirds of an octopus’s brain capacity is spread throughout its arms.  Load it onto your new Samsung Galaxy Tab S2 from T-Mobile and get free shipping on your orders of $25 or more.

5. The Cthulhu Christmas Calendar—Nix those saccharine advent calendars you’ve grown to despise and trade them in for this gem on Google Play.

6. Call of Cthulhu: Wasted Land—One of the most highly lauded games on Google Play, this turn-based strategy/role-playing game based on the award winning Call of Cthulhu RPG. Set in the midst of World War One, the game pits your team of investigators and soldiers against an ancient enemy, one older than humanity itself.

7. The Cephalod Page—If you are considering keeping octopi in your aquaria, study uo on this website.  They are challenging, and that’s an understatement.  They are carnivores that feed on live food.  They have the ability to escape from tanks too.

8. Under the Sea—If your tots are enthralled by the octopus they saw at the aquarium, but not ready to keep their own aquarium, tickle their imaginations with the nautically-inspired coloring book in the Apple app store.

Happy Octopus Awareness Day.  Step aside sharks, whales and dolphins.  Octopi take center stage on the 8th.  Celebrate and save using our codes!